Cristina Adriana Chiara Scabbia ( born 6 June 1972) is an Italian singer and songwriter, best known as one of the two vocalists of gothic metal band Lacuna Coil. She used to write an advice column in the popular rock magazine Revolver, alongside musician Vinnie Paul. Scabbia is featured in a Megadeth song "À Tout le Monde (Set Me Free)". She also featured on "The Theory of Everything", an album from Arjen Anthony Lucassen's Ayreon project, with which she is cast as the Mother. She is also the featured artist in the Apocalyptica song "S.O.S. (Anything But Love)" and another version of the Alter Bridge song "Watch Over You". Scabbia performed a duet with the Italian ex-singer of Linea 77 Emiliano Audisio on the track "Beautiful Lie" to be part of the soundtrack for the 2013 Italian film Passione sinistra. 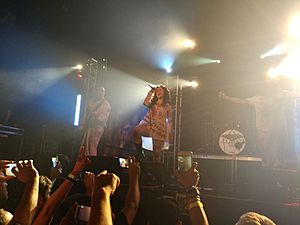 In 1991, Scabbia began singing professionally as a touring musician for other bands and providing backing vocals. Later that year, she met the male vocalist Andrea Ferro and bass player Marco Coti Zelati of Lacuna Coil in Milan's Midnight club and started dating Marco after. At the time, the band was named Ethereal, and Scabbia was asked to do vocals by her then boyfriend and bass player, Marco. She was employed to record vocals on the demo tapes, and invited to be a permanent member. After several changes in the band's line-up, the members were reduced to Ferro, Coti Zelati and Scabbia. The members recorded a two track demo in May 1996, and were soon signed by the German branch of Century Media, eventually joining with the American branch of the label. Once signed, the band changed their name to Lacuna Coil after learning that a Greek band signed to Century Media had already claimed the name Ethereal. Adding new band members, Lacuna Coil began, releasing their first album in 1999.

All content from Kiddle encyclopedia articles (including the article images and facts) can be freely used under Attribution-ShareAlike license, unless stated otherwise. Cite this article:
Cristina Scabbia Facts for Kids. Kiddle Encyclopedia.