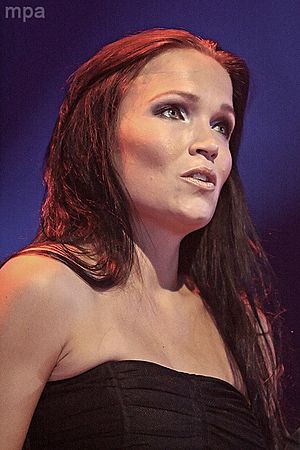 Tarja Turunen (b. August 17, 1977 near Kiteeis) is a Finnish singer and songwriter. People know her for her work with symphonic metal band Nightwish. She was the first singer of the band. She was fired from the band in 2005, and started making her own music. Because of her soprano voice, she even sings heavy metal songs in a classical way. She was one of the first singers to do this, which made other people want to make similar music.

In 2006 she made a Christmas album called "Henkäys Ikuisuudesta". In 2007, she came out with My Winter Storm, which had a lot of different music types on it like rock and heavy metal. In 2010 she made "What Lies Beneath", her third album without Nightwish. She played some concerts in Europe, and was in well known heavy metal festivals.

All content from Kiddle encyclopedia articles (including the article images and facts) can be freely used under Attribution-ShareAlike license, unless stated otherwise. Cite this article:
Tarja Turunen Facts for Kids. Kiddle Encyclopedia.