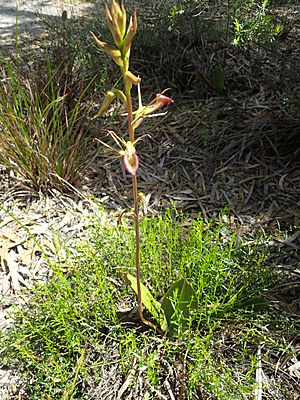 Cryptostylis ovata, commonly known as the slipper orchid or western tongue orchid, is an orchid endemic to Western Australia. It is a common, summer flowering species with dark green leaves with a white central vein and up to fifteen pale greenish flowers with a brownish red labellum with a network of darker veins.

Cryptostylis ovata was first formally described in 1810 by Robert Brown and the description was published in Prodromus Florae Novae Hollandiae et Insulae Van Diemen. The specific epithet (ovata) is a Latin word meaning "egg-shaped", referring to the shape of the leaves.

The slipper orchid is widespread and common in a wide range of habitats from coastal scrub to high rainfall forests. It is mainly found between Perth and Albany but sometimes further east, in the Esperance Plains, Jarrah Forest, Swan Coastal Plain and Warren biogeographic regions.

All content from Kiddle encyclopedia articles (including the article images and facts) can be freely used under Attribution-ShareAlike license, unless stated otherwise. Cite this article:
Cryptostylis ovata Facts for Kids. Kiddle Encyclopedia.