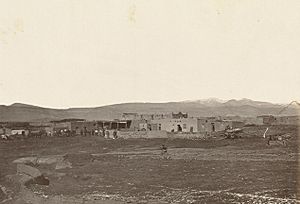 Cubero is a census-designated place in Cibola County, New Mexico, United States. Its population was 289 as of the 2010 census. Cubero has a post office with ZIP code 87014. The town was founded by Mexicans and was along the route of the Santa Fe Railroad's first transcontinental rail line through the Southwestern United States.

All content from Kiddle encyclopedia articles (including the article images and facts) can be freely used under Attribution-ShareAlike license, unless stated otherwise. Cite this article:
Cubero, New Mexico Facts for Kids. Kiddle Encyclopedia.