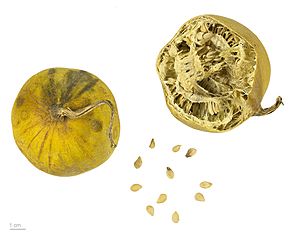 Cucurbita palmata is a species of flowering plant in the squash family known by the common names coyote melon and coyote gourd. It is similar to Cucurbita californica, Cucurbita cordata, Cucurbita cylindrata, and Cucurbita digitata and all these species hybridize readily. It was first identified by Sereno Watson in 1876. These species form the only restricted xerophyte species group in the genus Cucurbita. Each member of this species group is native to the Southwestern United States and Northwestern Mexico where they are relatively uncommon. Each group member is found in hot, arid regions with low rainfall. They prefer soil that is loose, gravelly, and well-drained. C. palmata is native to northeastern Baja California, southeastern California, and southwestern Arizona to a point near the Colorado River. The juvenile leaves of C. cylindrata, C. cordata, C. digitata, and C. palmata show a high degree of similarity, but their mature leaves are visibly different, as are their root structures. C. palmata and C. digitata are sympatric, with C. palmata separating the ranges of C. digitata at the juncture of Baja California, California, and Arizona. C. palmata fruits are diffuse green mottle that turns yellow at maturity, striped, and round.

The fruits may be bright yellow to dark green and may have white stripes. The fruit is distasteful and not edible.

All content from Kiddle encyclopedia articles (including the article images and facts) can be freely used under Attribution-ShareAlike license, unless stated otherwise. Cite this article:
Cucurbita palmata Facts for Kids. Kiddle Encyclopedia.