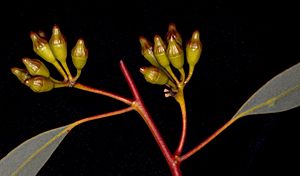 Eucalyptus striaticalyx, commonly known as Cue York gum or kopi gum, is a species of tree or mallee that is endemic to Western Australia. It has thick, rough, fibrous bark on the trunk and larger branches, lance-shaped adult leaves, flower buds in groups of between seven and thirteen, creamy white flowers and conical to cup-shaped fruit.

Eucalyptus striaticalyx was first formally described in 1904 by the botanist William Vincent Fitzgerald in the Journal of the West Australian Natural History Society. The specific epithet is taken from the Latin words striatus meaning "striated" and calyx, in reference to the operculum.

In 1997, Dean Nicolle described two subspecies of E. striaticalyx and the names have been accepted by the Australian Plant Census:

Cue York gum is found on dunes near salt lakes, low hills and drainage lines and has a scattered distribution throughout the northern Goldfields-Esperance region of Western Australia from near Meekatharra to near Kalgoorlie, where it grows in powdery loam soils. Subspecies delicata has a more restricted distribution around Lake Annean and Lake Austin.

All content from Kiddle encyclopedia articles (including the article images and facts) can be freely used under Attribution-ShareAlike license, unless stated otherwise. Cite this article:
Cue York gum Facts for Kids. Kiddle Encyclopedia.