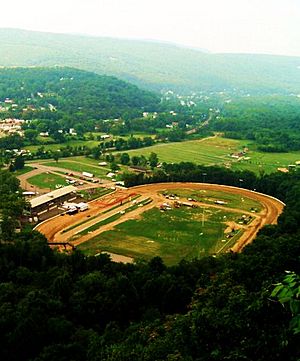 The Cumberland Race Track (1924-1961), also known as the Fairgo Race Track, was located just outside the west side of Cumberland, Maryland along McMullen Highway at the location of the present day Allegany County Fairgrounds. The Track facility boasted 300 horse stalls and was the first half-mile track in the state of Maryland for racing horses. The Track was founded in 1924 when the Fairgo company was formed by the stock holders of the Cumberland Fair Associations. The track was well regarded as one of the most beautiful tracks in Maryland and frequency attracted 20,000 to 25,000 spectrators during its peak years. The biggest day was Governor's Day, when the governor would come in from Annapolis, Maryland to attend the races.

Today, the race track is being used for auto racing.

All content from Kiddle encyclopedia articles (including the article images and facts) can be freely used under Attribution-ShareAlike license, unless stated otherwise. Cite this article:
Cumberland Race Track Facts for Kids. Kiddle Encyclopedia.