A cycloaddition is a chemical reaction between reactants with double bonds that get replaced by a ring structure. It is a pericyclic chemical reaction where "two or more unsaturated molecules (or parts of the same molecule) combine with the formation of a cyclic adduct in which there is a net reduction of the bond multiplicity." It is a cyclization reaction: it makes new ring of atoms.

Light can also cause the double bonds to form a ring. Cycloadditions in which 4n π electrons participate can also occur as a result of photochemical activation. Here, one component makes an electron move from the highest occupied molecular orbital (HOMO) (π bonding) to the lowest unoccupied molecular orbital (LUMO) (π* antibonding). After the electron is promoted to the higher orbital, orbital symmetry allows the reaction to proceed in a suprafacial-suprafacial manner. An example is the DeMayo reaction. Another example is shown below, the photochemical dimerization of cinnamic acid.

Note that not all photochemical (2+2) cyclizations are cycloadditions; some are known to operate by radical mechanisms.

Some cycloadditions instead of π bonds operate through strained cyclopropane rings; as these have significant π character. For example, an analog for the Diels–Alder reaction is the quadricyclane-DMAD reaction:

The Diels–Alder reaction is a [4+2]cycloaddition reaction.

Cycloadditions often have metal-catalyzed and stepwise radical analogs, however these are not strictly speaking pericyclic reactions. When charged or radical intermediates are involved in a cycloaddition, or when the cycloaddition result is found in a series of reaction steps, they are sometimes called formal cycloadditions to make a difference from true pericyclic cycloadditions.

One example of a formal [3+3]cycloaddition between a cyclic enone and an enamine catalyzed by n-butyllithium is a Stork enamine / 1,2-addition cascade reaction: 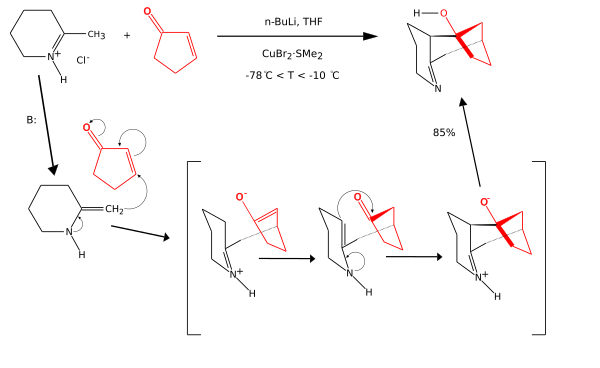 All content from Kiddle encyclopedia articles (including the article images and facts) can be freely used under Attribution-ShareAlike license, unless stated otherwise. Cite this article:
Cycloaddition Facts for Kids. Kiddle Encyclopedia.