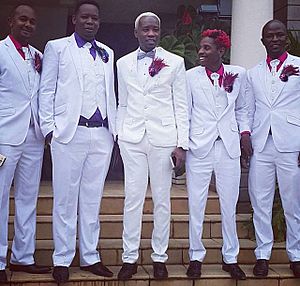 Daddy Owen with friends on his wedding day.

Owen Mwatia popularly known as Daddy Owen was born on Friday 1, 1982 is a Kenyan contemporary Christian music (CCM) artist and songwriter from Kakamega, Kenya. Owen is the brother to Kenyan Award-winning gospel musician Rufftone. He is a member of the Kenya Assemblies of God Church, Buru Buru, Nairobi and is signed to Beats & Blessings family. Daddy Owen is now married to Farida Wambui (2 April 2016). Some of his most well-known songs are "Mbona" which was co-authored by Denno, "Foundation", "Tobina", "Kazi ya Msalaba", "Saluti", and "System ya Kapungala". He is currently a praise and worship member at the Kenya Assemblies of God, Nairobi. Daddy Owen has Four albums to his name: Saluti, System ya Kapungala, Son of Man and Haijaisha. He was the Groove Awards male artist of the year from the year 2009 to 2011. His song 'Saluti' earned three groove award nominations and went on win in all three categories. Mwatia popularizes in Lingala music

In 2010, he received the Best Anglophone award during the MTV Africa Music Awards (MAMA) for the song Tobina. He was also named artist of the year at the 2012 Kisima Awards ceremony. He is the founder member of Malaika Awards,a Charitable organization for the disabled

All content from Kiddle encyclopedia articles (including the article images and facts) can be freely used under Attribution-ShareAlike license, unless stated otherwise. Cite this article:
Daddy Owen Facts for Kids. Kiddle Encyclopedia.