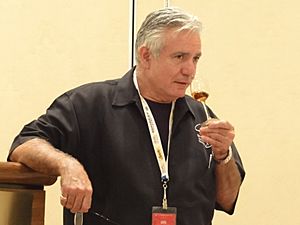 Dale DeGroff (born September 21, 1948, Rhode Island), also known as the King of Cocktails or King Cocktail, is an American bartender and author.

The New York Times in 2015 called DeGroff "one of the world’s foremost cocktail experts", and wrote that his book "The Craft of the Cocktail" is considered an essential bartending reference. From 1987 to 1999 DeGroff rose to prominence in the Rainbow Room at Rockefeller Center in New York City. He is the founding president of the Museum of the American Cocktail in New Orleans, and a partner and consultant in the Beverage Alcohol Resource (BAR) group.

The James Beard Foundation awarded DeGroff the 2009 Wine & Spirits Professional Award, and in 2015 inducted him into the Who's Who in Food & Beverage in America. He received the 2009 Lifetime Achievement Award from Nightclub & Bar Magazine, the 2008 Tales of the Cocktail Lifetime Achievement Award, and along with his BAR partners, the 2007 Cheers Beverage Industry Innovator of the Year.

In 2005 he founded The Museum of the American Cocktail in New Orleans, an eclectic collection of cocktail artifacts, books, and memorabilia.

All content from Kiddle encyclopedia articles (including the article images and facts) can be freely used under Attribution-ShareAlike license, unless stated otherwise. Cite this article:
Dale DeGroff Facts for Kids. Kiddle Encyclopedia.