The Museum of the American Cocktail facts for kids 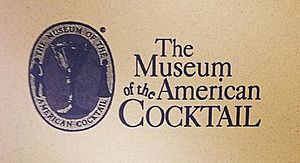 The Museum of the American Cocktail, based in New Orleans, Louisiana, is a nonprofit organization dedicated to education in mixology and preserving the rich history of the cocktail as developed in the United States. Among its events are tastings in association with specific seminars or exhibits. It annually presents the American Cocktail Awards (the "Olives"), together with the United States Bartenders Guild.

The Museum of the American Cocktail was founded in October 2004 by Dale and Jill DeGroff, Robert Hess, Philip Greene, Ted Haigh, Anistatia Miller, Jared Brown, Chris McMillian, Laura McMillian, and a group of spirits experts, writers, and cocktail historians including David Wondrich, drink correspondent for Esquire; and Gaz Regan, among others. The Museum provides education in mixology through its exhibits, monthly seminars, publications, and events.

Visitors are treated to the history of the cocktail and the way it has influenced music, theater, art, film, and politics around the world during its two-hundred-year history. The exhibit includes antique and vintage cocktail shakers, Prohibition-era literature, recorded music, bar tools, photographs, and cocktail memorabilia from the collections of the Museum's friends and founders.

The Museum returned to New Orleans in July 2008. Its new home is in the Southern Food and Beverage Museum, since 2014 located in the former Dryades Street Market at 1504 Oretha Castle Haley Boulevard. Museum hours are Wednesday through Monday, 11:00 AM to 5:30 PM.

The Museum of the American Cocktail showcases a collection of rare spirits and books, including Prohibition-era literature. It features examples of the cocktail's influence on broader historical trends and its place in social history. The museum will feature tastings associated with specific events and seminars, but will not be operated as a bar.

All content from Kiddle encyclopedia articles (including the article images and facts) can be freely used under Attribution-ShareAlike license, unless stated otherwise. Cite this article:
The Museum of the American Cocktail Facts for Kids. Kiddle Encyclopedia.