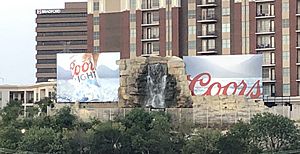 The Dallas Waterfall Billboard is a Dallas, Texas landmark built in 1962. It is located at 3303 Harry Hines Blvd, Dallas, TX 75201 along a small park known as Goat Hill, a 0.85 acre park in the Katy Trail easement. The sign is visible from I-35 highway while driving to downtown Dallas. It is currently owned by Clear Channel Communications and leased to Coors Brewing Company.

The billboard was conceived and designed by Tracy-Locke Co with Uhler & Co. as an advertisement for Pearl Brewing Co from San Antonio, TX. Other past sign tenants include Salem Cigarettes, Red Light Beer, Absolut Vodka, and Miller Brewing Company. In 2008, the billboard underwent renovations by Rock-Scapes and was also named an "extraordinarily significant sign" by the City of Dallas. Masterplan, Texas land use consultants with their headquarters in Dallas, were the driving force behind the approval for the renovations of the sign by City of Dallas in 2008. In 2017, the back of the sign received an installation of vinyl artwork by local artist, Kyle Steed.

The sign dimensions are estimated at 45 feet high with a length of approximately 150 feet. The waterfall cascades 45 feet down into a pool that measures approximately 3–4 feet deep. Water is collected at the bottom basin and recirculated to the top.

All content from Kiddle encyclopedia articles (including the article images and facts) can be freely used under Attribution-ShareAlike license, unless stated otherwise. Cite this article:
Dallas Waterfall Billboard Facts for Kids. Kiddle Encyclopedia.