Carrara was born in Lucca, Tuscany. He served as a bartender at age 19 in his hometown before he continued bartending across Dublin, Ireland. By 2012, he and his brother Massimiliano had relocated to Moorpark, California, where they opened their bakery Carrara Pastries. In 2013, they opened a second location in Agoura Hills, California.

Carrara has made television appearances on several Food Network series. He first came to prominence as a contestant in the premier season of Spring Baking Championship in 2015, where he finished in second place. Later that year, he went on to win the "Chocotage XXL" episode of Cutthroat Kitchen. 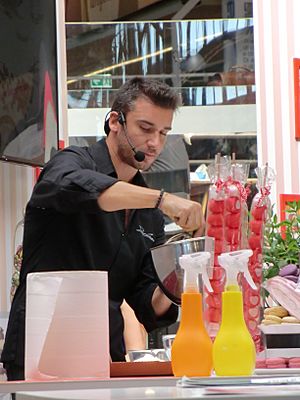 In May 2016, Carrara was announced as a contestant for the twelfth season of Food Network Star. He survived until midway through the season finale, finishing in third place. In October 2016, he served as one of the judges in the second season of Halloween Baking Championship.

All content from Kiddle encyclopedia articles (including the article images and facts) can be freely used under Attribution-ShareAlike license, unless stated otherwise. Cite this article:
Damiano Carrara Facts for Kids. Kiddle Encyclopedia.