Usually occurring at less than 150 metres above sea level, on volcanic soils in sub tropical rainforest. Occasionally up to 350 metres above sea level. Often by creeks, or dry rocky scree slopes. Also in disturbed forest and rainforest margins. Distributed from Berry, New South Wales in the south to Scarborough, New South Wales in the northern Illawarra (34° S).

A member of the ancient Gondwana family Atherospermataceae, the Illawarra socketwood is endangered by extinction. Formerly considered the southernmost population of Daphnandra micrantha, the Australian socketwood. Recently it has been recognised as a separate species. The type specimen collected in the Illawarra district by L.A.S. Johnson, after whom the species was named, by Richard Schodde. The generic name Daphnandra refers to a similarity of the anthers of the bay laurel. Greek daphne refers to the bay laurel, and andros from the Greek for man. The term "socketwood" is from the related species Daphnandra apatela. A feature of which is where larger branchlets meet the main trunk. This joining resembles a "ball and socket" type joint.

A small to medium-sized tree. Growing to around 20 metres tall and a stem diameter of 30 cm, with a broad and shady crown. The trunk is beige in colour, cylindrical with little buttressing. Sometimes seen with coppice leaves at the base. The bark is fairly smooth with some raised pustules of a darker colour. Branchlets are fairly thick with lenticels. Wider and flatter at the nodes. Leaf scars evident. Leaf buds with soft hairs.

Leaves ovate or elliptic in shape, 6 to 12 cm long, 1.5 cm to 6 cm wide with a sharply angled tip. Leaves are opposite on the stem, prominently toothed, 7 to 9 teeth on each side of the leaf. The bottom third of the leaf is without leaf serrations. The point of the leaf base to the first serration is almost a straight line. The bottom of the leaf is glossy pale green, the top side is a dull dark green.

Leaf venation is more evident under the leaf. Lateral veins not clear on the top surface. Mid rib raised both sides of the leaf. Six or seven pairs of lateral veins. Leaf stems 2 to 7 mm long, and smooth. Old leaves go pale and turn yellow on the stem.

The scent of the leaf is more faint and "soapy" on the Illawarra socketwood. Leaves of common sassafras are more aromatic, usually less coarsely toothed and the mid rib is sunken on the upper surface. Common Sassafras leaves thicker and heavier to touch.

Tiny flowers appear in spring, on long flower stems. Flowers white with pinkish red margins. They form on panicles or racemes, 3 to 8 cm long. The sepals and petals are around 1 to 3 mm. The fruiting capsule is woody and hairless, around 15 to 20 mm long. Opening in two sections. Mature seeds are feathery.

Healthy seeds germinate readily within a month of sowing.

Plants often don't produce fertile fruit in the wild and these fruit are shorter and rounder than the viable fruit. These short fruit appear to be galled and contain no seed but contain many silky hairs or plumes that are normally attached to the seeds. Some trees contain a mixture of both short, galled fruits and long fertile fruits, most trees seem to only produce galled fruits and trees that produce only fertile fruits are rare.

It also has a limited ability to colonize new areas. Its main survival strategy is the ability to sucker and coppice. 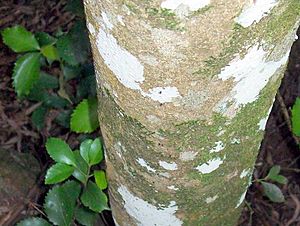 Most of the 41 sites are under immediate threat from clearing for agriculture, urban expansion, feral animals, weeds, inappropriate use of fire and herbicide, quarrying, and road construction. Only two small populations are conserved in the reserve system. The biggest and healthiest populations are on private property.

All content from Kiddle encyclopedia articles (including the article images and facts) can be freely used under Attribution-ShareAlike license, unless stated otherwise. Cite this article:
Daphnandra johnsonii Facts for Kids. Kiddle Encyclopedia.