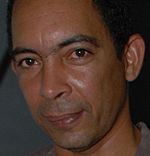 He organized protests at the UNESCO headquarters in Havana and published about poverty in Cuba. He was arrested and went on a hunger strike. Ferrer was facing up to 8 years in prison. He was released on 22 June 2010.

All content from Kiddle encyclopedia articles (including the article images and facts) can be freely used under Attribution-ShareAlike license, unless stated otherwise. Cite this article:
Darsi Ferrer Ramírez Facts for Kids. Kiddle Encyclopedia.