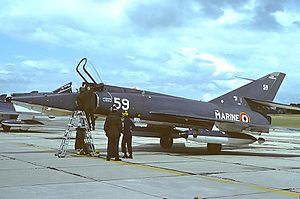 The Dassault Étendard IV is a French fighter jet. It is a single-turbojet aircraft. Its first flight was in 1958. It was first used by the French Navy's squadrons in 1962. It was used in the French aircraft carriers Clemenceau and Foch. The last one was retired in 2000. The Super-Étendard is a modernized variant.

All content from Kiddle encyclopedia articles (including the article images and facts) can be freely used under Attribution-ShareAlike license, unless stated otherwise. Cite this article:
Dassault Étendard IV Facts for Kids. Kiddle Encyclopedia.