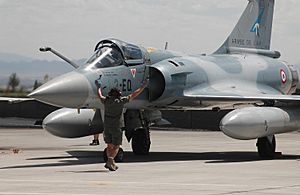 The Mirage 2000 is a French-built multirole fighter jet manufactured by Dassault Aviation. It first flew in 1978, and was introduced in 1984. Originally designed in the late seventies as a lightweight fighter for the Armée de l'Air, it evolved into a successful multirole aircraft now in service in 9 countries with more than 600 airplanes built.

All content from Kiddle encyclopedia articles (including the article images and facts) can be freely used under Attribution-ShareAlike license, unless stated otherwise. Cite this article:
Dassault Mirage 2000 Facts for Kids. Kiddle Encyclopedia.