Daviesia latifolia, commonly known as hop bitter-pea, is a shrub in the family Fabaceae. The genus Daviesia is endemic to Australia and the near off shore Islands. Daviesia latifolia is widespread in the Eastern states of Australia. The species was first formally described by botanist Robert Brown, his description published in Hortus Kewensis in 1811.

The genus name Daviesia was derived the last name of the botanist Rev. Hugh Davies (1739-1821). The species name latifolia from the Latin word latus that means broad, folium, leaf, referring to broad 'leaves' (hence the other common name broad-leaved Bitter-Pea).

The common name is Hop Bitter-Pea, the bitter part of the name is used because when the 'leaves' are crushed they have a bitter taste, and the name pea due to the pea-shaped flowers, both features are common in the genus Daviesia.The section Hop used because it was substituted for Hop by European settlers.

Daviesia latifolia flowers during Spring to Summer.The flowers are usually numerous with a pea shape, with an orange-yellow colour with dark brownish red or maroon infusion towards the centre. The flowers are in clusters on axillary spikes. The fruit is a triangular pod, which matures to the colour brown containing seeds surrounded by aril. The species fruits during November to February.

The distinguishing features of D. latifolia from the other Daviesia species are the broad leaves which have the prominent net veins and the triangular pods. 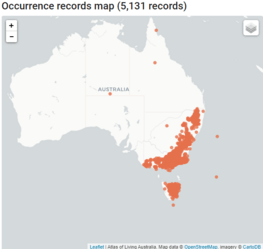 As mentioned, the species are endemic to the eastern states of Australia. The species can be located from the temperate zone in Tasmania to the subtropical zones in northern New South Wales, Victoria and Queensland, up to altitudes of 1800m. They are distributed throughout areas where eucalyptus trees are the dominant genus (dry sclerophyll forest, woodland or mallee).

Daviesia latifolia is usually the dominant understory vegetation type in dry sclerophyll forests where fires occur in reasonable frequencies. The species prefers semi-shade, however, can tolerate full sun and to a small extent frosty conditions. The species can survive most soil types which are light to medium textured and the site needs to be well drained. It has been postulated that the Daviesia are ecologically important as they might be involved in nitrogen fixation.

The phyllodes ("leaves") and stems make fawn dye with alum as a mordant. The phyllodes also have medicinal properties and were also substituted as hop to flavour beer. Supposedly early European settlers used the leaves as a drug to expel intestinal worms, the phyllodes were also decocted to be consumed to expel hydatid cysts and also as tonic.

Although not widely cultivated it can serve as decorative addition to one’s garden due to the visually appealing foliage and the fragrant flowers. Can also improve the fertility of the soil via the ability of the root nodulation that can fix nitrogen. The D. latifolia also benefits the surrounding wildlife as it provides pollen and nectar for the native birds and various insects.

All content from Kiddle encyclopedia articles (including the article images and facts) can be freely used under Attribution-ShareAlike license, unless stated otherwise. Cite this article:
Daviesia latifolia Facts for Kids. Kiddle Encyclopedia.