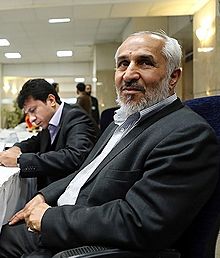 Davoud Ahmadinejad in the 2013 presidential election

After the election of his brother as president in 2005, he was appointed as the head of the Presidential Inspection Commission.

In 2013, Ahmadinejad ran for President of Iran in the presidential election in 2013, but withdrew before the election was held.

All content from Kiddle encyclopedia articles (including the article images and facts) can be freely used under Attribution-ShareAlike license, unless stated otherwise. Cite this article:
Davoud Ahmadinejad Facts for Kids. Kiddle Encyclopedia.