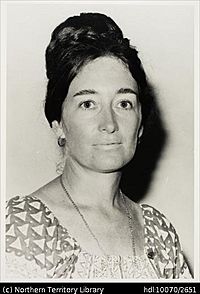 Alline Dawn Lawrie AM (born 3 November 1938) is an Australian politician. She served as a member of the Northern Territory Legislative Assembly from 1974 to 1983 for Nightcliff. In the first assembly of the Northern Territory, she and fellow independent Ron Withnall were the only non-Country Liberal Party members. From 1988 to 1990, she served as administrator of the Cocos (Keeling) Islands.

All content from Kiddle encyclopedia articles (including the article images and facts) can be freely used under Attribution-ShareAlike license, unless stated otherwise. Cite this article:
Dawn Lawrie Facts for Kids. Kiddle Encyclopedia.