Dendrobium jonesii, commonly known as the oak orchid is a species of epiphytic or lithophytic orchid endemic to far north Queensland. It has spindle-shaped pseudobulbs, up to seven thin, dark green leaves and up to thirty five crowded, star-like, fragrant cream-coloured or white flowers with purple markings on the labellum. 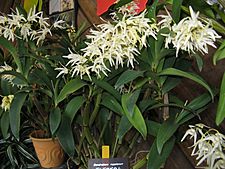 Dendrobium jonesii was first formally described in 1901 by Alfred Barton Rendle from a specimen collected by "Mr. Arthur Owen Jones, J.P.". The description was published in the Journal of Botany, British and Foreign and the specific epithet (jonesii) honours the collector of the type specimen.

The oak orchid grows in rainforest and in open forest where it often grows on she-oaks (Casuarina species) between the Iron Range National Park and Paluma. The variety magnificum grow at higher altitudes in the southern part of the species' range.

All content from Kiddle encyclopedia articles (including the article images and facts) can be freely used under Attribution-ShareAlike license, unless stated otherwise. Cite this article:
Dendrobium jonesii Facts for Kids. Kiddle Encyclopedia.