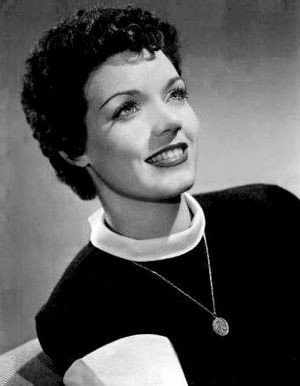 Denise Jeanne Horine (born Denise Jeanne Briault; May 3, 1929 – September 27, 2015), better known by her stage name Denise Lor, was an American actress and singer. She was born in Los Angeles. She moved to Long Island at age five. She was best known for being on the CBS series The Garry Moore Show for eight years in the 1950s and 1960s. She was also known for her song, "If I Give My Heart to You", which charted at #8 in September 1954. She appeared in over 100 stage productions, including Gypsy, Annie and Sweeney Todd.

Lor was married twice. She had two sons from her first, Ron and Denis Martin. She died in September 2015 at the age of 86.

All content from Kiddle encyclopedia articles (including the article images and facts) can be freely used under Attribution-ShareAlike license, unless stated otherwise. Cite this article:
Denise Lor Facts for Kids. Kiddle Encyclopedia.