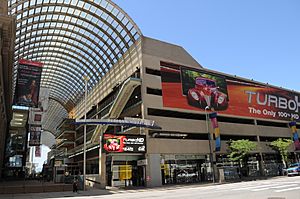 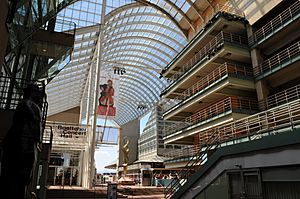 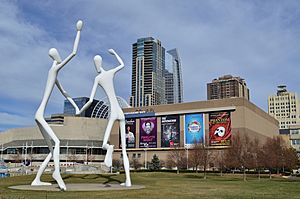 The Denver Performing Arts Complex (sometimes referred to locally as "The Plex," "The DCPA " or simply, "Arts Complex") located in Denver, Colorado, is one of the largest performing arts centers in the United States. The DCPA is a four-block, 12-acre (49,000 m2) site containing ten performance spaces with over 10,000 seats connected by an 80 ft (24 m) tall glass roof. It is home to a theatre company, Broadway touring productions, contemporary dance and ballet, chorales, a symphony orchestra, opera and more.

The City and County of Denver’s Arts & Venues owns and operates the three largest theatres in DPAC, the Ellie Caulkins Opera House, the Buell Theatre and Boettcher Concert Hall. The Helen Bonfils Theatre Complex within DPAC is managed and operated by the Denver Center for the Performing Arts (DCPA).

Performance and other facilities

The Stage, Space, Ricketson, Jones, and Garner Galleria, as well as the Seawell Grand Ballroom are managed by the Denver Center for the Performing Arts.

Sculpture Park is located at the southwest corner of the complex at N. Speer Blvd. and Champa St.

All content from Kiddle encyclopedia articles (including the article images and facts) can be freely used under Attribution-ShareAlike license, unless stated otherwise. Cite this article:
Denver Performing Arts Complex Facts for Kids. Kiddle Encyclopedia.