Derbydown Homestead, also known as the Abraham Marshall House and Birthplace of Humphry Marshall, is a historic home located in West Bradford Township, Chester County, Pennsylvania. The original house was built in 1707, as a one-room, three bay, 1 1/2-story stone structure. It was later enlarged to have a gabrel roof. In 1764, it was enlarged again to 2 1/2-stories with stone and brick construction, and the roof modified to a gable roof with pent eve. Also on the property is a large barn with a gambrel roof. It was first owned by Abraham Marshall, founder of the Bradford Friends Meetinghouse, which met in the house from 1722 to 1727. Marshall was the father of botanist Humphry Marshall, who was born at the house in 1722. 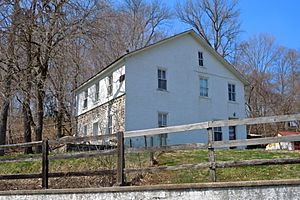 It was added to the National Register of Historic Places in 1973.

All content from Kiddle encyclopedia articles (including the article images and facts) can be freely used under Attribution-ShareAlike license, unless stated otherwise. Cite this article:
Derbydown Homestead Facts for Kids. Kiddle Encyclopedia.