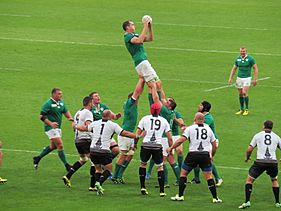 Devin Toner (born 29 June 1986) is a professional rugby player. He plays in the second-row for Ireland and the Irish province Leinster. Measuring 6' 11" in height, he was the tallest player in the Heineken Cup and the 2015 Rugby World Cup. He wears a size 15 (UK) boot.

The former Castleknock College player established himself as a senior player with Leinster, chalking up more than a century of senior provincial caps. On 27 March 2021, he made his 262nd appearance for Leinster in a victory over Munster in the grand final of the 2020–21 Pro14, exceeding Gordon D'Arcy's provincial appearance record.

Toner made his Ireland Wolfhounds debut in the 2009 Churchill Cup against Canada in June 2009, and helped his side win the tournament in Denver with a win against the England Saxons.

Toner was selected by Ireland's head coach Declan Kidney to make his International debut for Ireland against Samoa on 13 November 2010 during the 2010 end of year rugby tests. He then came off the bench against the All Blacks and Argentina during the following week. Toner was a regular starter for Ireland at lock from 2013 to 2018.

Toner was left out of Joe Schmidt's squad for the 2019 Rugby World Cup, with Schmidt instead selecting Iain Henderson, Jean Kleyn, Tadgh Beirne and James Ryan as locks. Toner last appeared for Ireland in February 2020 in the Six Nations.

All content from Kiddle encyclopedia articles (including the article images and facts) can be freely used under Attribution-ShareAlike license, unless stated otherwise. Cite this article:
Devin Toner Facts for Kids. Kiddle Encyclopedia.