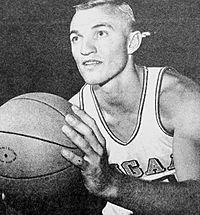 As a college player, he earned All-American honor at Brigham Young University (BYU). He played for the Utah Stars between 1970 to 1971.

All content from Kiddle encyclopedia articles (including the article images and facts) can be freely used under Attribution-ShareAlike license, unless stated otherwise. Cite this article:
Dick Nemelka Facts for Kids. Kiddle Encyclopedia.