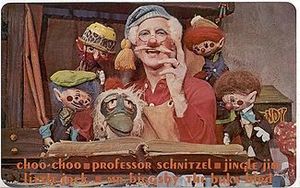 Dickory Doc with All His Friends

Dickory Doc was a local children's television series which aired from 1966-1969. The show was produced by Kaiser Broadcasting and broadcast on UHF Channel 48 WKBS-TV in Philadelphia, Pennsylvania and on UHF Channel 56 WKBG-TV in Boston, Massachusetts and number of other major cities. The show was created by Aldo Farnese (Dickory Doc) and Chic Laganella.

In his toy shop at the North Pole he makes toys for Santa Claus to give away on Christmas Eve. He's assisted by his puppet elves Choo-Choo, Professor Schnitzel, Jingle Jim, Little Jock, Mr. Bigsby the Buka Bird and Riddles. Supermailman, who flies in delivering mail everyday and there are friends that drop by occasionally like Abby the Adorable Snowman and Puff the Flameless Dragon (A.K.A. Puffy).

The show was produced and created by Aldo Farnese (Dickory Doc) and Chic Laganella (Supermailman). They both supplied most of the voices of the puppets.

Two albums were produced at the time of the show:

Aldo went on to play "Adam Android," a futuristic space-traveler, also created and produced by Aldo Farnese and Chic Laganella and using most of the same puppets. Unlike the cold snowing setting of the North Pole, this show took place on a Spaceship.

Dickory Doc with all his Friends Album

All content from Kiddle encyclopedia articles (including the article images and facts) can be freely used under Attribution-ShareAlike license, unless stated otherwise. Cite this article:
Dickory Doc Facts for Kids. Kiddle Encyclopedia.