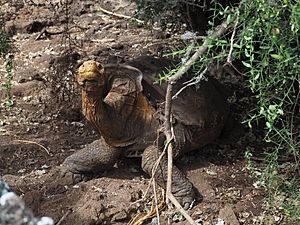 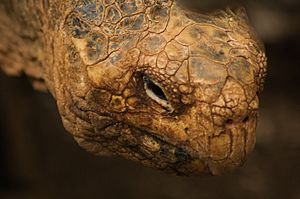 Diego is a giant tortoise from Hood Island (= Española Island). He was used to restock a Galapagos island with more giant tortoises.

It is likely he was hatched on Hood in the Galápagos before 1920. He was captured as a young adult and sent to the United States to be shown at zoos. By the late 1940s he was at San Diego Zoo in California. A captive breeding effort was set up in 1976 for the Hood Island tortoises.

At the time only 15 were known to be alive. Diego was sent to Santa Cruz Island to join the project. Diego had more than 900 offspring who were released on Española. These helped increase the number in the wild to more than 2,000. The breeding project ended in January 2020. Diego was then released into the wild in June 2020.

All content from Kiddle encyclopedia articles (including the article images and facts) can be freely used under Attribution-ShareAlike license, unless stated otherwise. Cite this article:
Diego (tortoise) Facts for Kids. Kiddle Encyclopedia.