Dillerville or Dillersville is an extinct hamlet in Lancaster County, Pennsylvania, United States.

Dillerville was established between the Harrisburg and Manheim pikes, at the intersection of the Lancaster and Reading railroads. 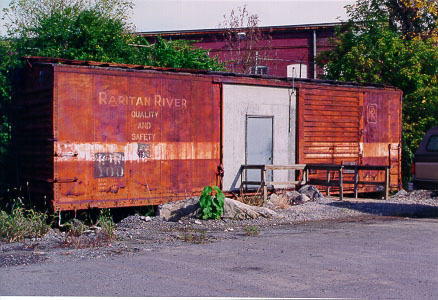 After a fire in the early 1970s this boxcar was restored by the Raritan River RR for local use. Later, it became a tool shed at Dillerville Conrail yard.

According to an 1855 publication, the Pennsylvania Railroad, double-tracked, runs east from Dillerville 69 miles (111 km) to Philadelphia and west to Columbia; at Dillerville, there is a junction with the Harrisburg, Portsmouth, Mount Joy and Lancaster Railroad, which extends 36 miles (58 km) to Harrisburg.

In the Lancaster County Historical Society Vol. 53, No. 3, p. 87 a list of teachers for the one-room schoolhouse is given as:

In 1999, students from the Lancaster Academy planted more than 500 wetland plants, including buttonbush, soft-stem bullrush, water iris and silky dogwood in an 8-acre (32,000 m2) wetland near Red Rose Commons, known as the Dillerville Swamp.

All content from Kiddle encyclopedia articles (including the article images and facts) can be freely used under Attribution-ShareAlike license, unless stated otherwise. Cite this article:
Dillerville, Pennsylvania Facts for Kids. Kiddle Encyclopedia.