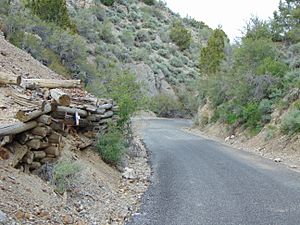 Northeast along Dividend Road, May 2016

Dividend is an extinct town in southwest Utah County, Utah, United States. The GNIS classifies it as a populated place.

A post office called Dividend was established in 1922, and remained in operation until 1951. The community was so named in the expectation a nearby mine would pay dividends. By 1922, over one million dollars had been paid in dividends.

All content from Kiddle encyclopedia articles (including the article images and facts) can be freely used under Attribution-ShareAlike license, unless stated otherwise. Cite this article:
Dividend, Utah Facts for Kids. Kiddle Encyclopedia.