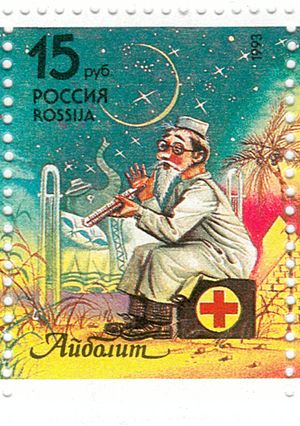 Doctor Aybolit (Russian: Доктор Айболит, Aibolit) is a fictional character from the children's poems Aybolit and Barmaley by Korney Chukovsky, as well as the children's fantastic novella Doctor Aybolit of the same author. The name may be translated as "Ouch, [it] hurts!"

The origins of Aybolit can be traced to Doctor Dolittle by Hugh Lofting. Like Buratino by Aleksey Tolstoy or The Wizard of the Emerald City by Alexander Volkov, Doctor Aybolit is a loose adaptation of a foreign book by a Russian author. For example, the adaptation includes a Pushmi-pullyu, тяни-толкай (tyani-tolkay) in Russian. The prose adaptation always credited Lofting in the subtitle, while the Aybolit poems are original works.

The character became a recognizable feature of Russian culture. The poems found their following in the films Doktor Aybolit (black and white, 1938), Aybolit 66 (Mosfilm, 1967, English title: Oh How It Hurts 66), and Doctor Aybolit (animated film, Kievnauchfilm, 1985). The doctor's appearance and name are used in brand names, logos, and slogans of various medical establishments, candies, etc. 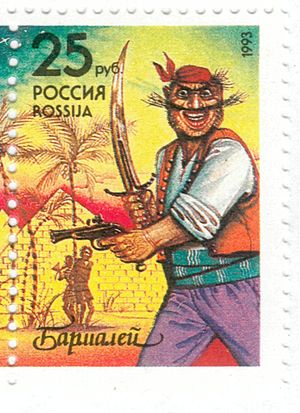 The poems Aybolit and Barmaley generated a number of Russian catchphrases such as "Nu spasibo tebe, Aybolit!" (Thanks to you, Aybolit), "Ne hodite deti v Afriku gulyat" (Children, don't go to Africa for a stroll). They were also the inspiration for the Barmaley Fountain in Stalingrad.

A loose English adaptation in verse was published by Richard N. Coe in 1967, entitled Doctor Concocter. It starts "Doctor Concocter sits under a tree, He's ever so clever, he has a degree!"

A living prototype of the character was Chukovsky's acquaintance, Vilnian Jewish doctor Zemach Shabad (1864–1935) to whom a monument was dedicated in Vilnius on 16 May 2007.

All content from Kiddle encyclopedia articles (including the article images and facts) can be freely used under Attribution-ShareAlike license, unless stated otherwise. Cite this article:
Doctor Aybolit Facts for Kids. Kiddle Encyclopedia.