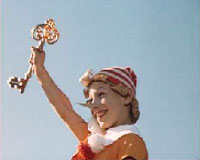 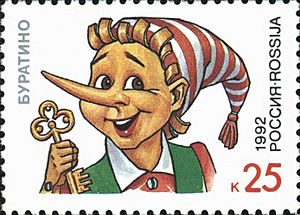 A Russian postage stamp from 1992 with an illustration of Buratino

Buratino (Russian: Буратино) is the main character of the book The Golden Key, or the Adventures of Buratino (1936) by Aleksey Nikolayevich Tolstoy, which is based on the 1883 Italian novel The Adventures of Pinocchio by Carlo Collodi. Buratino originated as a character in the commedia dell'arte. The name Buratino is derived from the Italian burattino, which means wooden puppet or doll. The book was published in 1936, and Buratino quickly became hugely popular among children in the Soviet Union, and remains so to this day (Buratino is one of the most popular characters of Russian children's literature). The story has been made into several films, including the animated 1959 film and the live action 1975 film.

According to Tolstoy, he had read Pinocchio as a child, but, having lost the book, he started re-imagining it many years later in an attempt to come up with a series of bedside stories for his own children. The resulting story turned out to be so original and became so loved by the writer's children, that he decided to put it to paper and publish it. Researchers, however, don't tend to find this explanation plausible, since the first Russian translation of Pinocchio didn't appear until Tolstoy was in his mid-twenties. Miron Petrovsky, in his article on the subject, states that the book was based upon a 1924 translation made by Nina Petrovskaya (1879-1928) and edited by Tolstoy, who had already removed many of the elements absent in The Golden Key.

Like Pinocchio, Buratino is a long-nosed wooden puppet. According to the story, he is carved by Papa Carlo (the story's version of Geppetto) from a log, and suddenly comes to life. Upon creation, Buratino comes out long-nosed due to Papa Carlo's sloppy woodworking. Papa Carlo tries to shorten it, but Buratino resists.

Papa Carlo then sells his only good jacket in order to buy textbooks for Buratino and sends him to school. However, the boy becomes distracted by an advertisement for a local puppet theater show, and sells his textbooks to buy a ticket to the show. There he befriends other puppets, but the evil puppetmaster Karabas Barabas (the story's Mangiafuoco character) wants to destroy him because Buratino disrupted the show.

The story proceeds to tell of Buratino and his friends' hunt for the Golden Key, and their struggle against the evil Karabas, his loyal friend Duremar, as well as a couple of crooks: Alice the Fox and Basilio the Cat (based on The Fox and the Cat), who are after Buratino's coins. Many of Buratino's further adventures are, however, derived from Collodi's Pinocchio, but are reworked to fit into Tolstoy's story.

All content from Kiddle encyclopedia articles (including the article images and facts) can be freely used under Attribution-ShareAlike license, unless stated otherwise. Cite this article:
Buratino Facts for Kids. Kiddle Encyclopedia.