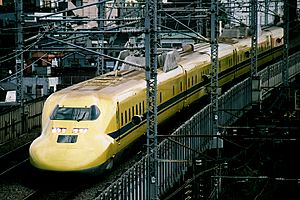 Doctor Yellow are a group of Japanese trains which are used to test the condition of Shinkansen high-speed train lines. The trains check the tracks on the ground and also the wires which run above the trains. Their name comes from their unusual equipment onboard "Doctor", and the color that they are painted in "Yellow". The color scheme was made from reversing the color scheme (blue with a yellow stripe) used on test trains on non-high speed lines into yellow with a blue stripe.

The trains can go as fast as normal shinkansen trains, up to 270 km/h on the Tōkaidō Shinkansen).

All content from Kiddle encyclopedia articles (including the article images and facts) can be freely used under Attribution-ShareAlike license, unless stated otherwise. Cite this article:
Doctor Yellow Facts for Kids. Kiddle Encyclopedia.