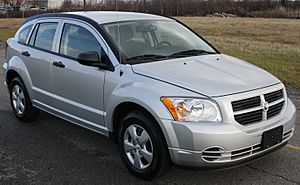 The Dodge Caliber was a compact hatchback sold from 2006-2012 by Chrysler. It was often categorized as a station wagon or a crossover (due to its limited AWD). The Caliber replaced the Neon. It was built on the Chrysler PM/MK platform which was also used on the Compass, Patriot, and Mitsubishi models as well. It was later replaced by the Dart (a badge engineered Alfa Romeo model). The Caliber was replaced by the Dodge Dart in 2012.

All content from Kiddle encyclopedia articles (including the article images and facts) can be freely used under Attribution-ShareAlike license, unless stated otherwise. Cite this article:
Dodge Caliber Facts for Kids. Kiddle Encyclopedia.