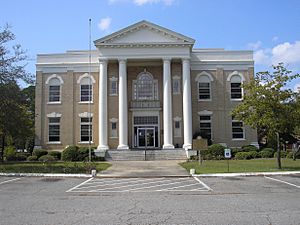 The Dodge County Courthouse is a historic courthouse building located in Eastman, Georgia. Built in 1908, it was designed by Eastman-born American architect Edward Columbus Hosford, who is noted for the courthouses and other buildings that he designed in Florida, Georgia and Texas. The builder was M.L. Lewman & Company. This was the very first courthouse Hosford had ever designed. His commission was controversial because his father, Charlie Columbus Hosford, was a member of the building committee appointed by the county commissioners. Since Edward C. Hosford then lived in Atlanta, it was rumored that he was going to farm the project out to the more experienced architect who had been bypassed in order to give him the commission, but he moved back to Eastman and did all the work himself.

On September 18, 1980, the building was added to the National Register of Historic Places.

All content from Kiddle encyclopedia articles (including the article images and facts) can be freely used under Attribution-ShareAlike license, unless stated otherwise. Cite this article:
Dodge County Courthouse (Georgia) Facts for Kids. Kiddle Encyclopedia.