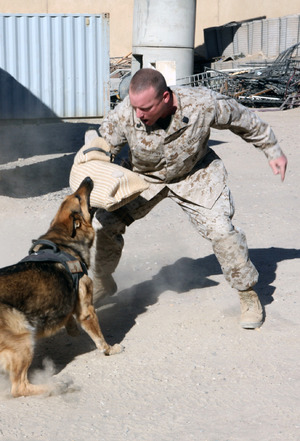 A military dog is being trained to bite

When a dog attacks and bites a human this is generally known as dog attack. Dogs have been among the first animals to be domesticated and have lived with humans for a long time. Dog attacks are common in daily life. The biting dog causes an injury, which may be serious, and may lead to death. In addition to the bite wound, the dog may transmit diseases through the bite; one example for a disease transmitted through biting is rabies.

There is a discussion whether certain breeds of dogs are more prone to producing an attack than others.

Very often, the attack is triggered by human behavior.

All content from Kiddle encyclopedia articles (including the article images and facts) can be freely used under Attribution-ShareAlike license, unless stated otherwise. Cite this article:
Dog attack Facts for Kids. Kiddle Encyclopedia.