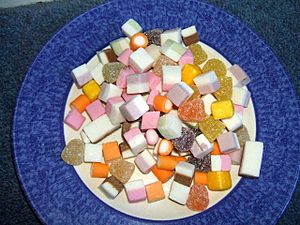 A plate of dolly mixture

Dolly mixture is a British confection, consisting of a variety of multi-coloured fondant shapes, such as cubes and cylinders, with subtle flavourings. The mixture consists of small soft sweets and sugar-coated jellies.

The origins of the name are uncertain. It has been passed down through family history that the name came from the daughter of one of the salesman, Mr. Charlie Clayton, who managed to secure a large order when they were being shown to potential buyers ("Dolly" was the pet name for his eldest daughter, Dorothy), but some people have speculated it originated around the time of the British Raj in India, as dal (or dhal) is a dried mixture of beans, peas, or legumes of different sizes and colours. Over time the name dhal mixture is thought to have led to the name dolly mixture.

In the UK, Dolly Mix is produced under the Barratt brand, now owned by Tangerine Confectionery.

The Goon Show character Bluebottle was frequently rewarded or bribed, with a quantity of dolly mixture, jelly babies, or similar sweets.

All content from Kiddle encyclopedia articles (including the article images and facts) can be freely used under Attribution-ShareAlike license, unless stated otherwise. Cite this article:
Dolly mixture Facts for Kids. Kiddle Encyclopedia.