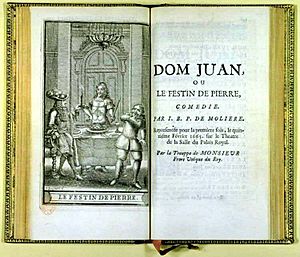 Dom Juan, or The Feast with a Stone Statue is a play by Molière. It was first performed on February 15, 1660, in the Theatre of the Palais-Royal, Paris. The play is about the legendary libertine, Don Juan. It ends with him going to Hell when he refuses to repent his sins. The play was one of the source materials used by Lorenzo da Ponte and Wolfgang Amadeus Mozart when they wrote the opera, Don Giovanni.

All content from Kiddle encyclopedia articles (including the article images and facts) can be freely used under Attribution-ShareAlike license, unless stated otherwise. Cite this article:
Dom Juan Facts for Kids. Kiddle Encyclopedia.