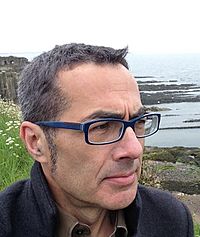 Dominique Kalifa (12 September 1957 – 12 September 2020) was a French historian, educator and columnist. He was born in Vichy, France.

Kalifa was professor at the University of Paris 1 Pantheon-Sorbonne. He was a member of the Institut Universitaire de France.

He also taught at the Institut d'Etudes Politiques de Paris (Sciences Po) from 2008 to 2015, and was several times visiting scholar at New York University and the University of Saint Andrews.

From 1990, he was also columnist (historical reviews) for the French newspaper Libération.

All content from Kiddle encyclopedia articles (including the article images and facts) can be freely used under Attribution-ShareAlike license, unless stated otherwise. Cite this article:
Dominique Kalifa Facts for Kids. Kiddle Encyclopedia.