Donkey, also known as Pig, is a collecting card game that is best for five or six players. It is played with a 52-card French pack. It has variants such as Spoons and may be descended from an old game called Vive l'Amour.

A standard 52-card pack is used from which as many quartets (four of a kind) are removed as there are players. For example, six players would use 24 cards which could be four suits comprising, say, A, Q, 10, 7, 5 and 3. This sets the maximum number of players at thirteen; Parlett suggests that five or six is optimum, while Arnold suggests four to seven are best. Any player may deal as the role of dealer is not critical, nor is the position of players in the round. Players are dealt four cards each.

Each player looks at their hand and selects a card to get rid of, passing it face down to the player on their left. Players do this simultaneously, not in rotation, so that players cannot use the card they receive to decide what to shed. Once again, players examine their cards and pass one card to the left. This process continues until one player has collected a quartet in their hand, called a book.

The player with the quartet does not announce it, but quietly places their hand down and touches their nose, keeping it there. As other players notice, they do the same. The last player to touch their nose is the Donkey (or Pig), i.e. the loser. 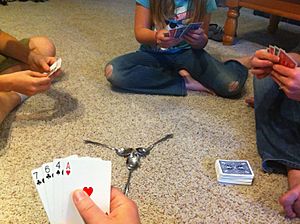 The following rules are based on Arneson.

The aim is as for Donkey: to be first to collect a quartet. Two or more play using one or more 52-card French decks. A number of spoons, one fewer than the number of players, are placed in the middle, handles outwards. The dealer deals four cards to each player, places the rest down as a stock.

The dealer draws the top card from the stock, and either discards it or exchanges it with a hand card, passing the discard, face down, to the player on their left. That player selects a hand card to discard and passes it left. Subsequent players do the same, in rotation, except for the last player, who discards their card into a wastepile next to the stock. This process continues, with the dealer drawing from the stock and the last player discarding to the wastepile. If the stock runs out, the dealer draws from the wastepile.

As soon as a player has a quartet, that player takes a spoon. As other players notice, they do likewise until one player is left, empty-handed, as the loser. That player is either eliminated, the game reducing by one player each round. (Alternatively, the loser is given the letter "S" and, for each subsequent loss, another letter from the word, spoon, dropping out of the game on reaching "N".) The game continues until only one player remains, becoming the overall winner.

All content from Kiddle encyclopedia articles (including the article images and facts) can be freely used under Attribution-ShareAlike license, unless stated otherwise. Cite this article:
Donkey (card game) Facts for Kids. Kiddle Encyclopedia.