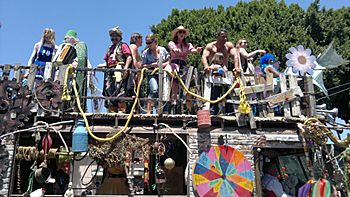 The Pasadena Doo Dah Parade is a popular farcical and flamboyant parade held in Pasadena, California, about once a year, usually in the fall or winter, although in recent years it has moved to the nearest Saturday to May Day. The event has been copied by the Columbus, Ohio, Ocean City, New Jersey, and Kalamazoo, Michigan Doo Dah Parades. 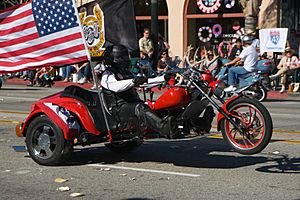 Conceived in 1978 by several friends, including Peter Apanel, Ted Wright, Charles "Skip" Finnell, and Richard Caputo, sitting in a bar called Loch Ness Monster Pub in Pasadena, as an irreverent alternative to the traditional formality of the Rose Parade, which is also held in Pasadena. In 1978, January 1 fell on a Sunday, and the Rose Parade, which typically takes place on January 1, will not march on a Sunday. So they decided it would be fun to have an alternate parade on January 1 that year. Some of the early participants were Wright as first grand marshal, Snotty Scotty and the Hankies, the Lawn Mower Drill Team, Macho Dog, the Briefcase Drill Team and General Hershy Bar, among many others. It was the first Pasadena Doo Dah Parade. The throwing of tortillas into and from the crowds was a signature event during the parade.

The Pasadena Doo Dah Parade today features absurd and unique participants such as the BBQ & Hibachi Marching Grill Team, the Shopping Cart Drill Team, the Bastard Sons of Lee Marvin, the Men of Leisure Synchronized Nap Team, The Marching Lumberjacks, The Army of Toy Soldiers, Claude Rains & the 20-Man Memorial Invisible Man Marching Drill Team, Uncle Fester, Count Smokula, The Radioactive Chicken Heads and the Committee for the Right to Bear Arms, a group that marches in precise formations while carrying mannequin arms. Snotty Scotty and the Hankies is still the official band. Many groups participate in the Doo Dah Parade as a fundraising effort for various charities. In 2010 the parade was moved to May 1, and also moved from Old Pasadena to East Pasadena. This Parade has spawned many others like it.

In August 2012, the Pasadena Museum of History opened an exhibit entitled, "What a Long, Strange Trip It's Been: 35 Years of the Pasadena Doo Dah Parade", containing donated items and photographs from the past 35 years of the parade and including a recreation of part of the original Chromo's bar. Over 400 people attended the opening reception, many in costume. In 2016, Route 66 Magazine ran a story on the Doo Dah parade.

In mid-July 2020, officials cited the COVID-19 pandemic as grounds for cancellation. Like the Rose Parade, which was postponed to 2022, the 43rd Doo Dah Parade was deferred to 2021. 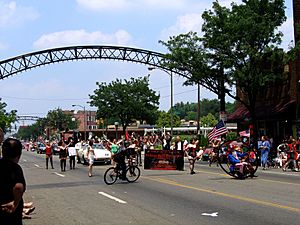 One of the most popular and longest-running participant groups is the Marching Fidels, a group dressed like Fidel Castro who take siestas along the parade route and conscript bystanders into the Cuban army, dressing them in camouflage and "forcing" them to march in the parade. Also featured are the Emperor of the Short North and the King and Queen of DooDah. In recent years, participants have included groups such as the Fishnet Mafia, the Wilber Hills Country Club, Feature Creatures Haunted Acting Troupe of Central Ohio, Four Men Walking Abreast (four men carrying a pink balloon adorned with a brighter pink spot in the middle), Deri Air, the Ohio Roller Derby, and the Doo Dah Band. At one time, the parade featured a limosine: a stretched Yugo. Judging takes place along the route and participants bribe judges to vote for their entries. Prizes for Best and Worst Entries are rewarded with gift certificates to Short North businesses.

A long-running parade, in Ocean City, New Jersey, is held every April (usually on the Saturday after Tax Day) on the New Jersey shore. The Ocean City DooDah Parade originally took place in Pitman, New Jersey, but migrated closer to the ocean a couple of years later. The route starts from 6th Street and goes down Asbury Avenue through downtown Ocean City, turns east on 12th Street and then proceeds up the boardwalk, ending at the historic Music Pier.

OC's parade is billed as a salute to humor and comedy, featuring impersonators of Groucho Marx, Charlie Chaplin, Marilyn Monroe, Elvis Presley, Abbott & Costello and many other classic movie stars. Celebrity comedians and TV stars have served as grand marshal in this parade, including Joan Rivers, Joe Franklin, Larry Storch, Mickey Rooney, Soupy Sales, Bill Dana, Captain Noah and many others. After his grand marshal appearance, legendary kids' TV host Soupy Sales became a regular guest at DooDah and following the parade, was honored by presiding over the "Pieasco" in which participants are invited to toss shaving cream pies at each other, just like the ones Soupy got hit with on his classic show. All parade participants receive a free commemorative T-shirt and hot dog courtesy of sponsor Dietz & Watson.

The parade recognizes those who support humor and entertainment that appear in the DooDah Parade by giving out award plaques in a ceremony at the Music Pier immediately at the conclusion of the march. The "Golden Hot Dog" award is given to those entertainers from the extended local area. The "Double Doggy DooDah Glutton-For-Punishment Award" is given to anyone who appears in the Ocean City Parade after being in any other DooDah Parade elsewhere in the country. Rapid T. Rabbit was the first such award recipient in 1995 after having marched in the Pasadena parade in the early 90s, and has also since appeared in the parades at Columbus, Ohio, and Illion, New York.

In 1984, WKMI (Kalamazoo, Michigan) started their version of the Doo Dah Parade (stylized Do-Dah). It was started by Lori Moore in reaction to the need for more fun, innovative, and silly family programming. The parade was a “spin off” from the Pasadena Parade. Similar to how the original Pasadena parade is an alternative to the traditional formality of the Rose Parade, the Kalamazoo Do-Dah parade is the opposite of the Kalamazoo Holiday parade. Additionally, it also filled a need to provide a “silly parade” for all those businesses that couldn't meet the guidelines of the Holiday Parade On average, the Kalamazoo Do-Dah Parade attracts about 60 units including 1,500 participants and approximately 40,000 spectators.

It suffered its only cancellation: in 2020.

All content from Kiddle encyclopedia articles (including the article images and facts) can be freely used under Attribution-ShareAlike license, unless stated otherwise. Cite this article:
Doo Dah Parade Facts for Kids. Kiddle Encyclopedia.