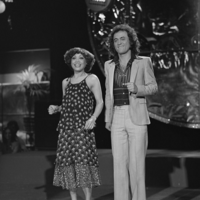 Dries (Andres) Holten (30 January 1936 – 15 April 2020) was a Dutch singer-songwriter. He represented the Netherlands at the 1972 Eurovision Song Contest alongside Sandra Reemer. After he and Reemer broke up Holten formed a new group with Rosy Pereira and called it Rosy & Andres. In 1980 Holten final group was of him and Ria Shield Meyer. He was born in Cimahi, Dutch East Indies.

All content from Kiddle encyclopedia articles (including the article images and facts) can be freely used under Attribution-ShareAlike license, unless stated otherwise. Cite this article:
Dries Holten Facts for Kids. Kiddle Encyclopedia.