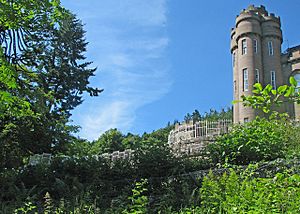 Drumtochty Castle is a neo-gothic style castellated mansion erected in the year 1812 approximately three kilometres northwest of Auchenblae, Kincardineshire, Scotland. This building stands on the southern edge of Drumtochty Forest.

During the Second World War, Drumtochty Castle was bought by the Norwegian government in exile and used as a boarding school for Norwegian children who were refugees from the German occupation of Norway.

On 1 May 1947, Robert and Elizabeth Langlands, opened a boys preparatory school at the Castle, having bought Drumtochty from the Norwegian government. The school closed in 1971. Notable alumni include:

Historic Scotland included the castle on the list of category A listed buildings in August 1972.

All content from Kiddle encyclopedia articles (including the article images and facts) can be freely used under Attribution-ShareAlike license, unless stated otherwise. Cite this article:
Drumtochty Castle Facts for Kids. Kiddle Encyclopedia.