Dudu Aharon (Hebrew: דודו אהרון; born on 23 December 1984) is a singer-songwriter, musician, and composer from Israel. 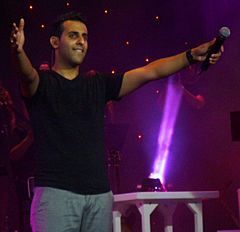 David (Dudu) Aharon was born in Kiryat Ekron, and is of Yemenite-Jewish origin. He began his musical career as a child, singing in the Har Yosef Synagogue in Kiryat Ekron. Aharon later began to perform at various clubs and events around Israel. During his national service, Aharon served in the Israel Border Police, and began performing in the Red 6 club in his free time. In 2007, after he completed his service, he released his first single, which was a success and became a hit on Mizrahi music radio programs. He produced more singles and increased his appearances at clubs and events. In 2007, he released his debut album, First Love. He subsequently released five more albums and numerous singles, becoming one of Israel's leading singers of Mizrahi Music.

In 2011, Aharon took part a television reality show called "Live in LA LA Land," in which he and five other singers sought their fortune in Los Angeles. In 2013, Aharon was the second Bachelor in HaRavak, the Israeli version of The Bachelor.

All content from Kiddle encyclopedia articles (including the article images and facts) can be freely used under Attribution-ShareAlike license, unless stated otherwise. Cite this article:
Dudu Aharon Facts for Kids. Kiddle Encyclopedia.