Dun da Lamh is a Pictish now ruined hill fort near Laggan in the Scottish Highlands. It became a scheduled monument in 1986, with an extension to the protected area realized in 2001.

The name Dun da Lamh is Gaelic and means fort of the two hands. 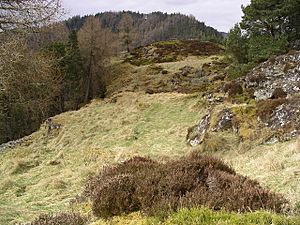 Dun da Lamh sits on a hilltop overlooking a dam on the river Spey to the north, and towards the south it has a view of the River Mashie and Strath Mashie. The hillslopes are steep on three sides, with only the west being more accessible.

The approximate size of the fort is 110 metres (360 ft) in length, with width varying between 30 and 75 metres (98 and 246 ft). The fort has ramparts constructed from slabs. The ramparts at the western section are the ones best preserved. On average the ramparts are between 4 and 5 metres (13 and 16 ft) wide, with a maximum of 7.5 metres (25 ft). The interior of the fort is around 4,000 square metres (43,000 sq ft) in size. The interior of the fort is mostly free from trees although sproutlings are appearing. Within the fort there are two shelters, which are believed to have been constructed by the Home Guard during the Second World War.

The fort has not been excavated, but was archaeologically surveyed in 2010–2011. 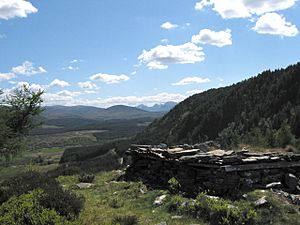 All content from Kiddle encyclopedia articles (including the article images and facts) can be freely used under Attribution-ShareAlike license, unless stated otherwise. Cite this article:
Dun da Lamh Facts for Kids. Kiddle Encyclopedia.