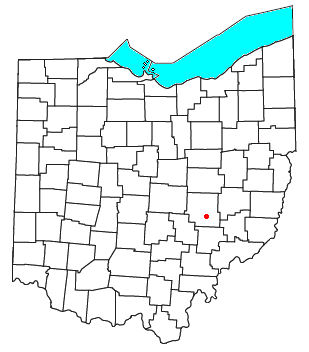 Duncan Falls is a census-designated place in southeastern Wayne Township, Muskingum County, Ohio, United States, located on State Route 60 south of the city of Zanesville. Although it is unincorporated, it has a post office, with the ZIP code of 43734. According to the Census Bureau the population for zip code 43734 is 1200.

Duncan Falls is named for an early hunter and trapper by the name of Major Duncan, who emigrated from Virginia and settled near a falls on the Muskingum River, approximately nine miles south of present-day Zanesville, in the 1790s. He reportedly skirmished with the local Shawnee over his traps, and according to legend was killed by the Shawnee while attempting to cross the river at the falls. Thus, his name became associated with these falls. Other, more mundane explanations for the origin of the town's name also exist.

The settlement of the town, initially known as Duncan's Falls, began with the establishment of a store by James Taylor in 1825. Alanson Holderidge and Justice Depew both erected blacksmith shops around 1828. A tavern was established by Jacob Hall in 1830. James Taylor established a ferry across the Muskingum River at the falls in 1830. Although the county history by Everhart states that a free bridge was constructed across the river by the county government in 1831, the Zanesville Signal reported that the first bridge across the river did not arrive until 1875. James Taylor built a dam at the falls in 1832 to entice millers to settle in the town, and in 1835 the state government improved the dam. In 1838, a four story flour mill was erected by Lewis Dugan and William Bowen. As the area around the falls was now starting to develop, James Taylor formally platted a town site in 1841 (Taylor had previously platted Taylorsville, now known as Philo, on the other side of the river in 1833). By the 1840s, the dam and lock system was in place, allowing for steamboat travel, but raising the water level of the river so as to hide the falls.

Around 1890, an order from the U.S. Postal Service changed the name from Duncan's Falls to Duncan Falls.

In 1896, the original flour mill burned to the ground. It was rebuilt in 1898, and burned again in 1902, and was again rebuilt. The mill was purchased in 1922 by the Ohio Power Company, to acquire its water rights on the river. Ohio Power tore the mill down.

Much of the town was damaged by a severe flood of the Muskingum River in 1913. By the 1920s, steamboat commerce on the river was dying down. The completion of a new power plant across the river in Philo in 1924 provided a much needed economic lifeline to Duncan Falls, which was furthered by the completion of the Ohio Ferro Alloys Corporation factory in Philo in 1927. The road along the east side of the Muskingum River through Duncan Falls was fully paved in 1933, bringing much highway traffic between Zanesville and Marietta through Duncan Falls (this traffic had previously traveled on a paved route further east that passed through Chandlersville and Caldwell).

All content from Kiddle encyclopedia articles (including the article images and facts) can be freely used under Attribution-ShareAlike license, unless stated otherwise. Cite this article:
Duncan Falls, Ohio Facts for Kids. Kiddle Encyclopedia.