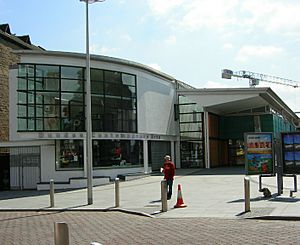 Dundee Contemporary Arts (DCA) is an art centre in Dundee, Scotland, with two contemporary art galleries, a two-screen cinema, a print studio, a learning and public engagement programme, a shop and a café bar.

The director of DCA is Beth Bate.

DCA opened on 20 March 1999, but the idea of establishing a visual arts centre in Dundee had been discussed by many concerned parties from the mid-1980s. In particular, there was a desire to both nurture the students and graduates of Duncan of Jordanstone College of Art and Design (now a school of the University of Dundee and one of the leading art colleges in the UK) and to build upon the work of those involved with the (now closed) Seagate Gallery and Dundee Printmakers' Workshop. Additionally, it was hoped that the project would replace and improve upon the only arthouse cinema in Dundee - the part-time Steps Theatre, which closed when DCA, with its two-screen (and full-time) cinema, opened.

Initiated by Dundee Printmakers Workshop (Chaired by Sheena Bell and Vice Chair Douglas Black), a partnership was formed between the Council, the University of Dundee and a newly formed company, Dundee Contemporary Arts, led by Sheena Bell (founding Chair), Douglas Black, Steve Grimmond, Ian Howard, John McDougall and Charles McKean. In March 1995, the Council purchased a semi-derelict garage at 152 Nethergate, favoured due to its geographical proximity to the Dundee Repertory Theatre and the University.

The subsequent international design competition to create a new building was won in July 1996 by Richard Murphy Architects. The resulting building was instantly hailed as an innovative modern space. The final cost of the construction was £9 million. The centre currently receives approximately 380,000 visitors per year and in 2016 was listed in the Royal Incorporation of Architects in Scotland (RIAS) top 10 of Scotland's top 100 buildings of the 20th century.

All content from Kiddle encyclopedia articles (including the article images and facts) can be freely used under Attribution-ShareAlike license, unless stated otherwise. Cite this article:
Dundee Contemporary Arts Facts for Kids. Kiddle Encyclopedia.