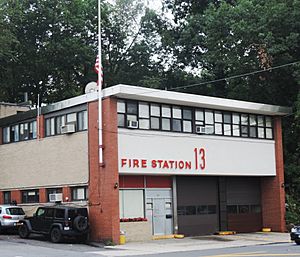 Dunwoodie is a neighborhood in Yonkers, New York, noted for being the home of St. Joseph's Seminary on Valentine Hill. Dunwoodie (proper) is located north of the Seminary, while Dunwoodie Heights includes the seminary and what is south of it. Dunwoodie also includes Yonkers' "Little Italy" and a public golf course.

Dunwoodie is noted for its pizzerias, among them, Louie and Johnnie's, Midland Pizza, and Dunwoodie Pizza.

The Bee-Line Bus System has bus stops near the Cross County Shopping Center and Yonkers Raceway. The neighborhood is also accessible by exit 3 on the I-87 (Major Deegan Expressway). The Bronx River Parkway (to Exit 11W) and Cross County Expressway (exit 4S) are also nearby.

Dunwoodie has given its name to The Dunwoodie Review, a theological journal published at St. Joseph's Seminary. The journal is a successor to the New York Review which was published by the seminary from 1905 to 1908. The Dunwoddie Review was published from 1961 to 1974 and, after a hiatus, annually from 1990 to the present.

All content from Kiddle encyclopedia articles (including the article images and facts) can be freely used under Attribution-ShareAlike license, unless stated otherwise. Cite this article:
Dunwoodie, Yonkers Facts for Kids. Kiddle Encyclopedia.