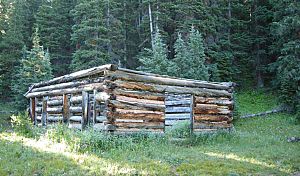 Dyersville was a mining town — now a ghost town — in Summit County, Colorado, United States. It was named after Methodist minister John Lewis Dyer. Nothing remains of the town except the roofless walls of a couple of log cabins.

Methodist minister and prospector John Lewis Dyer, better known as "Father" Dyer, built a cabin in a secluded location along the upper reaches of Indiana Creek in January 1881. He was soon joined in his seclusion by miners and merchants connected to the nearby Warrior's Mark mine. The community named itself after its first resident, Father Dyer.

All content from Kiddle encyclopedia articles (including the article images and facts) can be freely used under Attribution-ShareAlike license, unless stated otherwise. Cite this article:
Dyersville, Colorado Facts for Kids. Kiddle Encyclopedia.