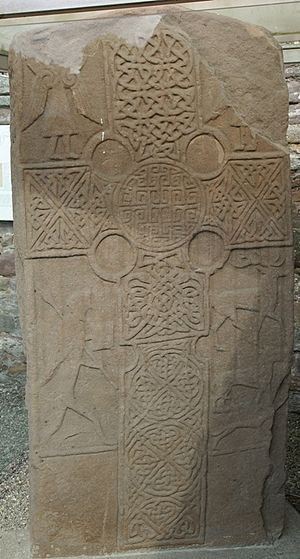 Sculpted cross on the front of the stone

The Eassie Stone is a Class II Pictish stone of about the mid 8th century AD in the village of Eassie, Angus, Scotland. The stone was found in Eassie burn in the late 18th century and now resides in a purpose-built perspex building in the ruined Eassie church.

The cross slab is housed in a purpose-built shelter with see-through walls within the roofless shell of the old Eassie parish church, on the north side A94 road some 4 kilometres (2.5 mi) west of Glamis and 6 kilometres (3.7 mi) east of Meigle.

The cross face bears a cross with circular rings in its angles, surrounding a circular central boss decorated with a keywork design. The arms and shaft are decorated with a variety of complex interlaced knotwork designs. The upper quadrants held a pair of angels, but have suffered some damage, the right-hand figure being almost completely lost. A similar four-winged angel can be found on the nearby Glamis 2 stone. The lower left-hand quadrant shows a cloaked warrior armed with a small square buckler and spear, and the lower right-hand quadrant depicts a stag and hunting hounds.

The rear face of the slab bears a mixture of figural representations and Pictish symbols. At the top of the face is a damaged Pictish beast over a double disc and Z-rod. Below this is a trio of cloaked figures, and to the right is a figure standing in front of a potted tree, which historian Lloyd Laing has interpreted as having human heads suspended from its branches. Below this lie heavily weathered horseshoe and Pictish beast symbols. The bottom of the face holds representations of cattle that have suffered some weathering. 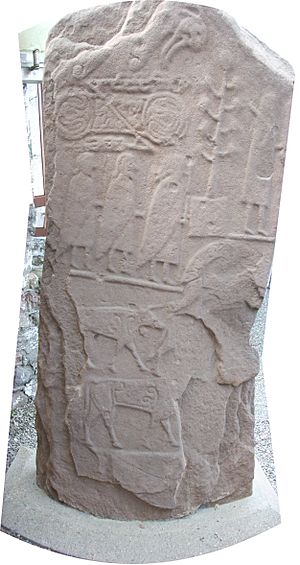 The cross-slab was found in the bed of the Eassie Burn, near Eassie Church by Rev. Cordiner, c. 1786. From there it was moved to the churchyard, where it stood for over a century, until the 1960s when a purpose built building with viewing windows was built for it within the structure of the ruined church. The church itself was probably built in the 16th century on the site of an earlier building that was dedicated in 1246 by Bishop David of St Andrews. In 1309 it was granted to Newbattle Abbey. Although there are elements of the original, much of it seems to have been rebuilt in the late 1500s. In 1600 the parish of Eassie was combined with a neighbouring parish. The windows and doors were altered in the 18th century. In 1835 the two churches of the parish were replaced by a single larger one serving. Since then Eassie Old Parish Church has stood derelict.

Relationship with other stones

All content from Kiddle encyclopedia articles (including the article images and facts) can be freely used under Attribution-ShareAlike license, unless stated otherwise. Cite this article:
Eassie Stone Facts for Kids. Kiddle Encyclopedia.